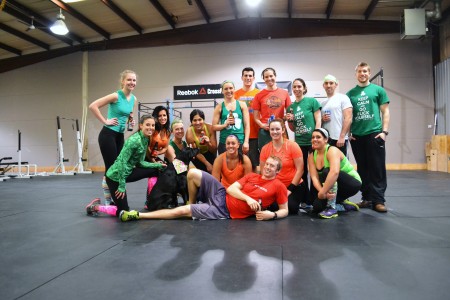 Whole30
Here’s another great essay, this one written by our other winner, Kayla:

“OK, I’d like to start by saying, I hate writing essays! So I apologize if I have the writing skills of a 5th grader. So let’s get down to it. The thought of doing paleo scared/intimidated me. I didn’t even have interest in learning more because I just didn’t want to do it. When I read about the Whole30, it seemed even worse. I immediately knew (thought) I wasn’t going to do it, had no desire. Obviously that ended up changing. I feel like I am almost always on a diet, or attempting to eat healthy in an effort to BE healthy, and to lose weight. At the same time that I completely rejected the Whole30 before even giving it a chance, I was also getting frustrated with my current “diet”. I started talking to people that were doing it and warmed up to it a bit. I thought I would try and convince Sean. I definitely thought he was not interested. When he told me he was thinking about it too, that’s when I decided we should do it. It’s really hard living with someone and being on a strict diet when the other is not. So him agreeing to it made up my mind.

Preparing for this to start made me really anxious. I didn’t know many varieties of cooking and I am THE pickiest person ever. With Sean working most nights and me being busy with work and crossfit and physical therapy, I usually only cooked a “real” meal the two nights Sean was home. Other days I’d have eggs, can of soup, grilled cheese…easy stuff. So I was nervous to take on all this cooking and planning.

The first few days of this diet were not so bad. I mostly ate everything in site that was allowed. Day 3 is when I felt my body changing. I had the worst headache ever. Awful. Day 4 was pretty much the same. After that I only started feeling better. I noticed myself waking up easier (this says a lot for me, I am not a morning person!), and having more energy during the day. I started getting into the routine of it and it became easy. There were a few days at about week 2, where just the THOUGHT of meat made me want to vomit. Any meat. Chicken, beef, whatever. I ate fruit those days (I know, bad. ), but its all I could get down. After that it was pretty smooth sailing. I did get cravings but no desire to satisfy those cravings. One of the bigger obstacles I dealt with was an engagement party. One of my best friends is getting married and I am a bridesmaid and it was really hard not to drink. At this point, it was the last weekend of the challenge. I was so invested that it really wasn’t that hard to say no. We just got tons of questions. Why weren’t we drinking? Why did we have a plate of fruit & raw veggies and nothing else? The most annoying part was the continuous explaining. However, just today, that very friend told me her and her fiancé are going to do the Whole30! So I guess I was convincing.

So, the results. I was very satisfied with my results. I lost weight, which was my number one goal. I also lost inches, which was great. But I got a whole lot more out of this. I just felt amazing. Better than ever before. I have done my fair share of diets, but nothing is comparable to this. I got so much more then weight loss out of it. I never felt bloated or heavy or full. The energy was great. I also learned how to cook a few things that were out of my normal element. I tried new things. I ATE BRUSSELL SPROUTS. And actually enjoyed them. I am clearly proud of that. When the 30 days were over, I had mixed emotions. At some points I was waiting and so happy when it was over. At the same time, I was nervous. I didn’t want to go back to my bad eating habits. It’s now been a week since it has ended. I ate a few bad things and definitely paid for it. I felt so guilty every time I ate something bad. I also felt disgusting. I am trying to stick to paleo now for the most part. I learned so much from this experience and it really opened my eyes to a lot of things. I am so happy I did it and would recommend this to anyone. It really changed the way I view food and what I put into my body and I believe that knowledge will stick with me forever. Thanks for pressuring us to do this!”

WORKOUT OF THE DAY