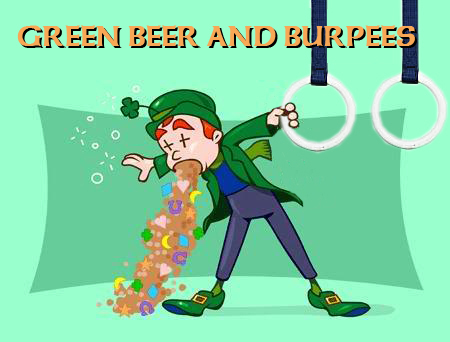 Now, I know St. Patrick’s Day is on Sunday, but we are going to observe the holiday in class on Saturday. We want to see everyone dressed in GREEN and/or ORANGE! We’ll be doing a fun team WOD; hope alot of you can make it! Afterwards, feel free to crack a beer and hang out, get the festivities started off right!

Whole30
Announcing the winner(s) of our Whole30 Challenge: Kayla and Sean!! After looking at the results and reading the essays, we had to give it to the two of them as a team! Great job guys; so proud of your hard work and beyond happy to hear how it has changed your lives!

There were so many good essays submitted by you guys, I laughed and cried reading all of them. We are going to be posting some of the essays over the next week to share with all of you. First up is Sean’s essay; take a read:

“The diet that will change your life.” That’s the slogan correct? So what’s the catch? What is going to make me re-evaluate the way I eat in 30 days? What’s the worst than can happen?

Truth is I’ve been an on again off again dieter ever since I started going to gyms at 16. Several diets were all fads and ended as fast as they started. Problem being the results faded just as fast as the diets did too. Or in extreme cases people were becoming ill or developing liver problems. So needless to say I jumped from diet to diet at a point trying to achieve that perfect balance of strength, fitness and health. Then it just sort of gets away from you, you get older, get a full time job then get a part time job to supplement that first job and your habits just change. I started eating fast food in between jobs, I would get home at 10 or 11 pm and be “starving” and decide, damn that frozen pizza is a good choice. And of course you just get into a groove and figure you can always lose it later. Well later never showed up.

Sugary drinks, late night eating, poor sleeping habits, stress and little to no time at the gym was all accumulating to this.

Fast forward to the diet, I wanted to accomplish three things during this process. Is it a real change? Will I feel/notice this change? How will I look/feel in my own clothes? That’s where my mindset was and I was determined to see this through. Although I would have to give up my Chippi’s from Marisol’s. At that point I felt like Gollum losing the ring his “precious.” But its thirty days and that’s not difficult. Also pre Whole30 I ate as much junk food and Chippi’s as I could I wanted to see a change I wanted to believe that its noticeable. I ate so much junk food I actually was sick a couple of times.

Emptied out the fridge, went shopping, spent a ton on meant veggies and fruit and started planning with Kayla on how we’re going to work around not only figuring out what we eat but how and when and portions.

Week 1 – This diet sucks. I am forever hungry and feel like anything I eat is never enough. Tried several different recipes some ok others not so much. Overall I’m pretty starving at this point.

Week 2 – Of course a massive blizzard hits and all you want to do is eat junk food right? WRONG, had the most friggen delicious thing I have eaten on this challenge. Lettuce tacos. Sounds so stupid simple but I demanded we make this at least 3 or 4 more times throughout the challenge. Romaine lettuce leaf, slightly seasoned beef, hot sauce (it was ok to use via whole 30) and topped off with shaved cucumber. I actually might go make myself one right now! Day 13. Noted that I was in complete bitch mode. Frustrated, I was getting headaches feeling tired really early. Like 730 8pm middle of part time job early. Getting home at 10 to 1030 and just passing out from exhaustion.

Week 3 – Crock Pot City – We have started using this thing for a lot of recipes. I’m noticing I feel less hungry and waking up in the morning is much much easier. Alarm goes off, BOOM I’m up. Starting to feel more natural energy as well. Headaches are non existent and loving some of the meals being made.

Week 4 – I don’t think I’m turning back. Through the first two weeks I questioned if It was working. Week 4 is here and I’ve seen results that I don’t want to go back on. Weight down, energy up, strength same clothes look and feel a hell of a lot better on as well. Did I mention that my clothes fit better? I did? Well good it was worth repeating.

I don’t actually recall my weigh in but I truly didn’t care anymore about how much my weight said in numbers. It was about how I felt and what I saw that had me. I had a belt that I was always on the last notch on, which means your fat get a bigger belt. In 30 days I moved 4 notches on that belt, in the right way. I felt faster, and looked thinner and I even had people I work with everyday noticing I was slimming out my sides and looking thinner in my face rather quickly.

So did the Whole30 fill my personal quota?
-Is it a real change? Yes, it’s a real change physically and mentally
-Will I feel/notice the change? I absolutely have, I have the feeling of being rejuvenated
-How will I look/feel in my own clothes? Awesome, my pants are all looser than they have ever been. My shirts feel better and business attire feels less constricting it’s a very noticeable change.

“….the diet that will change your life…”

Its right, it has changed my life. It’s a life that I never want to get back into again. Eating poorly, feeling miserable and sluggish and overall just feeling uncomfortable. Its changed my appetite and thinking about what I’m putting into my own body.

But after saying all of this and telling you how great I feel after it there’s one reason why I shouldn’t win this contest/challenge.

She won’t know I’m writing this and I plan on keeping it that way. I know what she’s planning on writing and it wont do her justice.

She has been a motivational aspect this entire challenge for me. Not just for the cooking and quite honestly being amazing at finding these recipes for the challenge to change things up, but for showing me determination.

Kayla is the worst eater in the history of man. She will literally pick through plates of food only selecting certain pieces of things and never trying anything outside of what she knows. Going on dates with her were a challenge when we first started dating because she didn’t have an allergy or anything she just didn’t want it. Fish? Not a chance Vegetables? Nope. Chicken? Can she see it first? Any type of red sauce? Nope nope nope. Just to name a few.

But starting this challenge something clicked, she started eating vegetables, different meats and even tried my salmon (although she hated it). Her long time close friends and family could not believe what they were hearing or seeing. Kayla had cauliflower mash and Brussels sprouts with chicken and she didn’t pick through the chicken and ate the sides? I thought her family was going to collapse.

Everyday we’d talk trough text at work and her day consisted of work, leaving work, planning on which cross fit class she could make after her physical therapy and then home to eat. Every Day. There were several days in which she was in physical pain going from physical therapy to cross fit. Yet she sucked it up and did it. Didn’t complain just knew she needed to get it done and did it. It might not have looked pretty or been the RX weight but when she got home she felt accomplished for that day. Hurting but accomplished.

If she could go through all her pain that she has in her foot and hip from her accident and still do this challenge and the wods and physical therapy why couldn’t I?
I was motivated for not only myself but even more motivated to keep her just as motivated.

She has no faith that she can win this thing. None. Because she didn’t lose the most weight or inches or have the best results. But here’s a victory she wont tell you about that’s she’s incredibly proud of. This past weekend she was able to get her foot into a pair of heels for the first time in almost two years. Kayla loves her heals and seeing her almost start to cry when trying them on and walking was a sight in itself. Maybe it has nothing to do with the Whole30 and crossfit but its just seems like the coincidence is too strange to not give thought too.

I’ll end with this, neither of us may win this challenge and that’s ok. But if I’m in contention to possibly win then I would like to pass that win onto Kayla. I’m excited with my results and that’s satisfying in itself for me.

But for her it would not only be a surprise but a feeling of accomplishment for her and something to use against me every once and a while. And to be honest, I’d be pretty happy about it.