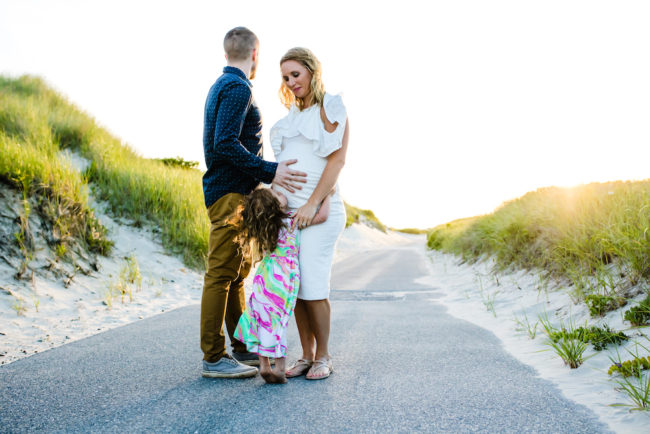 In March of 2014, I became pregnant with our first little girl. I was excited and scared, but determined to Crossfit my way through this to the end. I had trained for years and I knew what I was doing, so I was going to follow through and show people that women can Crossfit while pregnant.

All the way to 41 weeks doing kipping pull ups and push ups with two mats separated enough for my belly. People commented on how bad ass that was. I wish I could take that girl and shake her!

I had Sadie in December of 2014 and was so eager to get back to working out- lifting, gymnastics movements, double unders, just as I did before. There was a bit of pressure being a gym owner to get back to where I was.  And, let’s face it, I really wanted my abs back.

I did, quickly, just 9 days after having a natural birth at home, I was back at it. Slowly, of course, but rowing and making my way back to where I wanted to be.

That’s where I went wrong. I wish I could tell that young mama you had nothing to prove. Now in my defense, no one- not a doctor, midwife, chiropractor, physical therapist, or anyone ever mentioned Diastasis Recti and NO ONE ever mentioned pelvic floor health. What even is that?? It was about 8 months AFTER I gave birth, after I had been working out that I realized something wasn’t right. Sure, I had my pull ups back, I could lift heavy stuff, but I had this “pooch” and I also had this “coning ” that was happening all the time. I also noticed that doing simple tasks like standing on one leg was more difficult than it should be. And then of course there was the peeing! Double unders always resulted in peeing. But that’s totally normal right? It’s a badge of honor us mamas wear!

I did some research and diagnosed myself with Diastasis Recti. Diastasis Recti is a separation of the abdominal muscles. For those of you needing a visual- I had a gap that was three fingers wide and about knuckle deep. I had a severe case. I quickly learned that this happens to most woman, but fitter woman typically see a more severe case.

I found a twelve week program online that I followed and made some decent improvements, but guess what? It was never truly gone.

This pregnancy, I was doing things differently. I was cautious and aware my entire pregnancy but that Diastasis reared it’s ugly head just weeks into this pregnancy and it was more prominent than ever. Oh and I was of course peeing.

I read everything I could. I followed birthfit and I did what I could to keep it at bay.

After I had Adley I was lucky enough to find Nadine, a pelvic floor specialist who shined some light on this annoying, frustrating, yet totally normal part of pregnancy/ post partum. Nadine helped me to see that every single momma out there has this condition- some so minor they will never know it and others severe(but the reality is, most don’t know it).

I’m writing this because over the last year it has become my goal, my passion, to help myself and I want to now help others. For the record, I don’t regret working out during or directly after my pregnancies. I strongly believe it was my fitness and my nutrition that helped me through two healthy pregnancies and two long, but very healthy natural births.

In the last 6 months I have spent countless hours in the gym, in a corner, by myself doing what seems to be “silly” things. I get it. It looks silly and frankly, sometimes, it’s pretty damn boring. I want to snatch. I want to jump up on the damn rig and work on toes to bar and I really want to just be able to bang out my kipping pull ups again.

Why? It feels fine! You did it prior to pregnancy! You are a competent and experienced lifter! I get it, I hear you, I was you. But what you don’t realize, and neither did I, is the demands it places on the stability of the pelvis- which is tough to maintain for most athletes, nevertheless pregnant and postpartum women.

Pelvic floor health is very often ignored. It can be mistaken for back pain, belly pooch, extra skin (when in fact that’s not the case), leakage, etc. The thing is, common is most certainly not normal. Whether you are a new mom, a mom of a toddler, a mom of a teen, a mom of grown children, or not a mom at all, pelvic floor health is incredibly important and it’s not too late to help yourself. Those of you who are athletes focus daily on what makes you stronger, but often ignore what will actually have life long effects AND help make you stronger, more competent athletes.

What you do and don’t do in this chapter of your life, will affect the rest of your life. If you think you might need help with this, send me a message or check out the Seminar we are hosting this weekend.